Occupying the stretch of coast between northern Spain and southern France, the Basque Country is an autonomous region that welcomes visitors with charming villages, a gorgeous coastline and unspoiled nature. What’s more, the Basque community has a strong cultural identity that is widely reflected in the local language, cuisine and architecture.
Here’s our pick of the 10 most beautiful places to visit in the Basque Country. 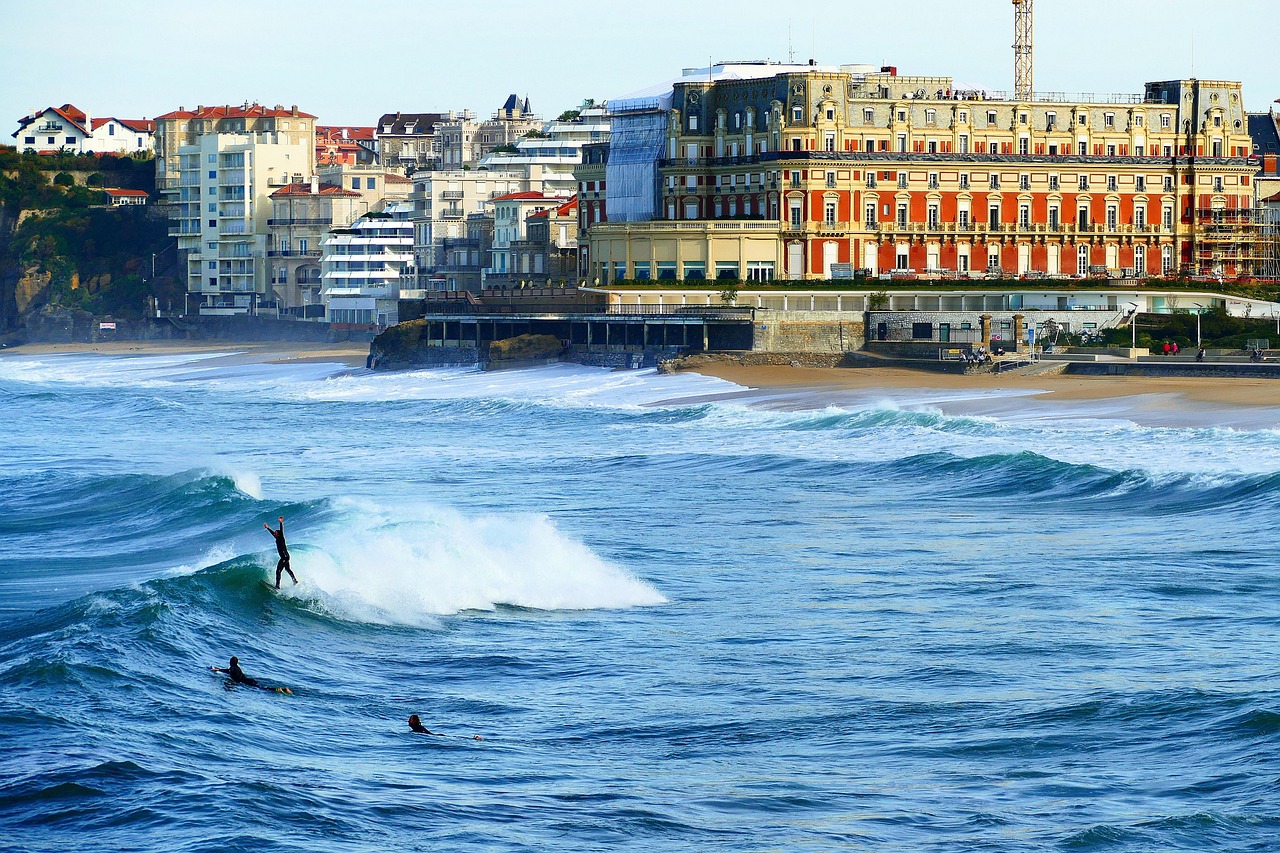 Sprinkled with elegant villas and Belle Epoque buildings, Biarritz has been attracting high society and wealthy beach-goers since the 19th century, when Empress Eugenia, wife of Napoleon III, built a grandiose summer residence right by the sea - now a luxurious hotel. Today this little coastal gem is a popular seaside resort and a favourite surfers' spot, boasting 6 km of sandy beaches and iodine-rich sea waters that are used for therapeutic purposes.
There are plenty of things to see in town, including the views from the Rock of the Blessed Virgin, accessible via a wooden bridge, the old lighthouse and a splendid art deco Aquarium. 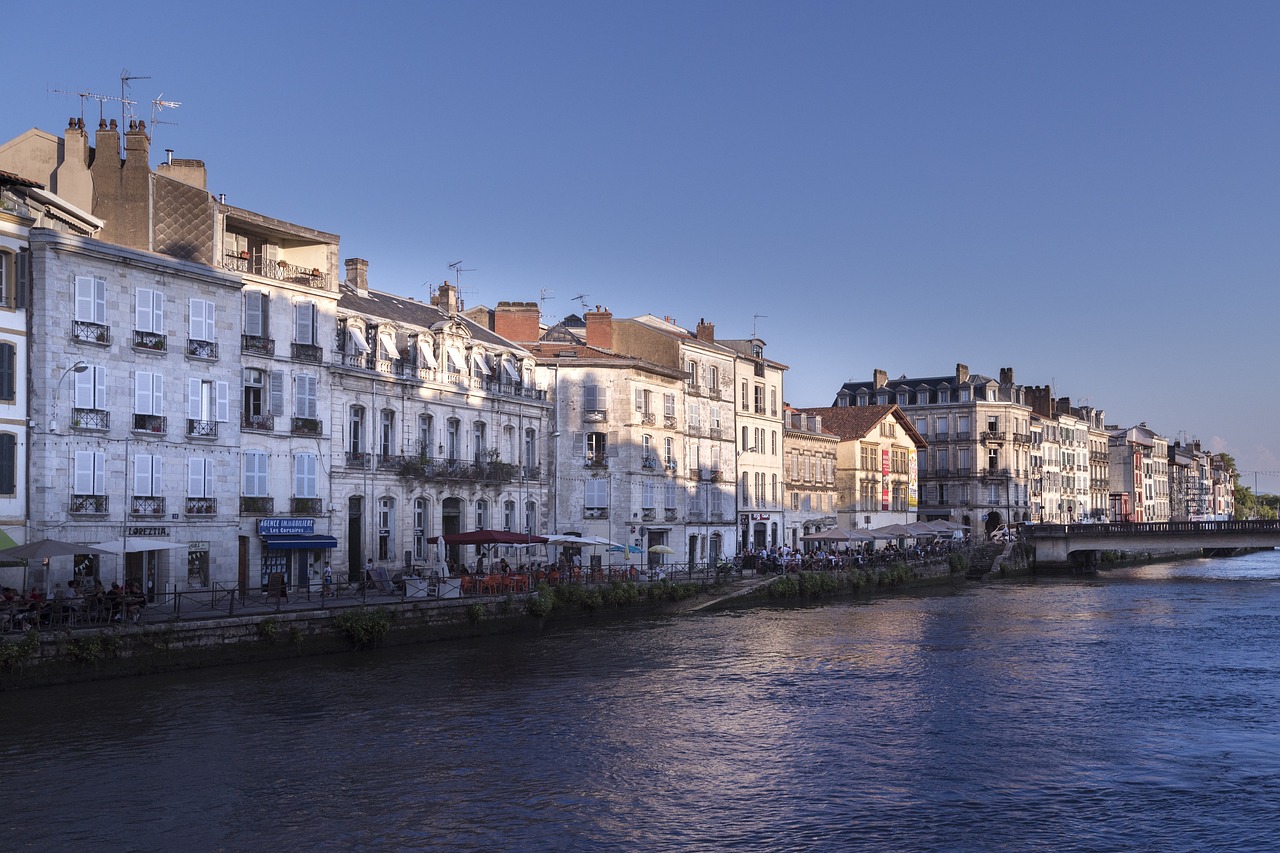 Although often overshadowed by its glamorous neighbour Biarritz, Bayonne is the main town of the French Basque Country and is rich in both cultural and historical attractions. Its old town is a maze of charming cobblestone streets and atmospheric lanes dotted with lovely sights, such as the St Mary's Cathedral and the medieval Château-Vieux, while colourful buildings in classic Basque-style line the town’s delightful riverbanks.
Bayonne is also a mecca for chocolate lovers, being one of the first places in Europe to start making chocolate as it’s known today back in the 17th century, and hosts the annual Fêtes de Bayonne, France’s largest festival that gives a nod to Pamplona’s famous Running of the Bulls.

Located in the province of Guipúzcoa in northern Spain and just a quick ferry ride away from the French side of the Basque Country, Hondarribia is a splendid medieval town surrounded by defensive walls. Its well preserved historic centre, Parte Vieja, features beautiful Basque-style houses with flowery balconies, splendid baroque buildings and a maze of winding lanes to explore. Also, the Carlos V Castle on top of the hill - now a hotel - offers great views over the surroundings.
Another area not to be missed is the Marina, with a lovely tree-lined pedestrian street dotted with lively pintxo bars and benches where groups of elderly locals gather to chat.

Halfway between Bilbao and San Sebastián, Lekeitio is an attractive port town with a lively yet relaxed atmosphere. The main sight is the Basílica de Santa María de la Asunción, a grandiose late-Gothic church with a stunning polychromed altarpiece, one of the biggest in Spain.
However, Lekeitio’s biggest draws are its remarkable beaches and the charming port lined with great seafood restaurants and pintxo bars. Also, when the tide drops it is possible to reach the pretty islet of San Nicolas on foot and admire the fantastic views from its highest point.

Pasaia is a picturesque fishing town nestled on the coast of Guipúzcoa, where the Oiartzun river joins the Atlantic Ocean. While it might be the largest industrial port in the area, its charming old town still retains the historic character and laid-back vibe of the area, with pastel-coloured houses and excellent seafood restaurants lining the waterfront.
The main highlights are the Arizabalo Palace, a splendid Baroque building that houses the local town hall, the hermitage of Santa Ana perched on top of a hill overlooking the entrance to the port, and the 17th-century church of San Juan Bautista. The Albaola nautical museum that pays homage to the region’s maritime history and the house where French writer Victor Hugo spent the summer of 1843 while working on his travelogue is also not to be missed. 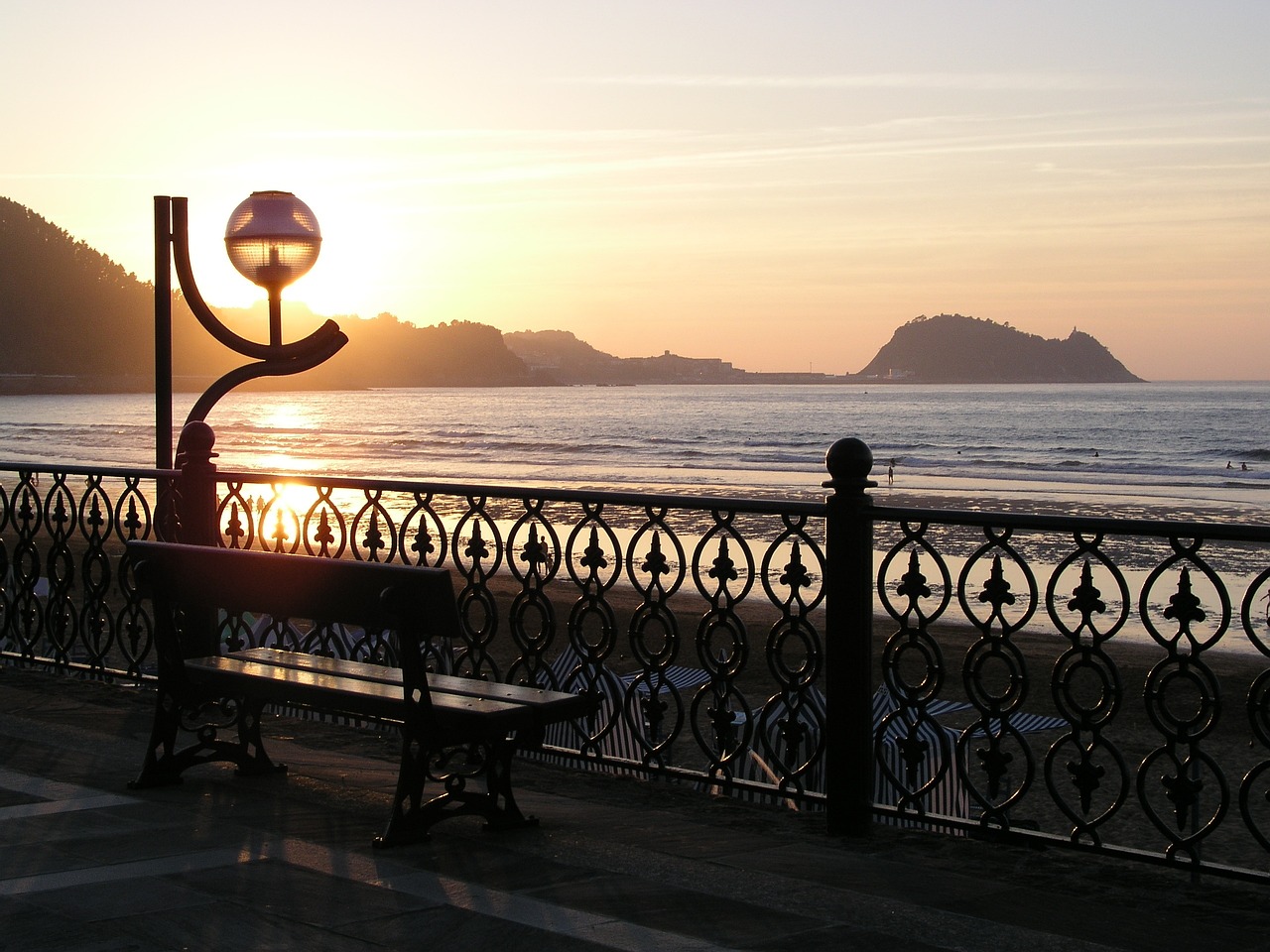 Overlooking the splendid Bay of Biscay, the historic town of Zarautz enjoys a stunning position on the northern coast of Spain, squeezed between mountains and sea. Zarautz’ pride and glory is its beautiful sandy beach - the longest in the Basque Country - which has been nicknamed the “queen of beaches” and attracts surfers from all over the world with its fantastic waves.
For those not so keen on beach life, the town offers also a variety of hiking paths and mountain bike trails, as well as interesting places to explore, such as the 16th-century Narros Palace, one of the region’s most impressive noble residencies, Musika Plaza, the town’s main square, and the old Luzea Tower, a small defensive building that now houses a fine Art and History Museum.

Located amid the Unesco-listed Urdaibai biosphere reserve, Bermeo is a little village with a long-standing tradition as a key whaling centre and major fishing port. Founded in the 13th century, the village is rich in history, as seen in the number of important sites sprinkled all over town, from the gothic Ercilla tower that houses the Fishermen’s Museum to the church of Santa Maria boasting a fine Neo-classical portico and Casa Kinkubera, with its unique structure that resembles a boat.
The delightful port, surrounded by traditional houses painted in colourful hues, still oozes unfussed atmosphere and authenticity, with a mix of traditional eateries and cosy cafés. 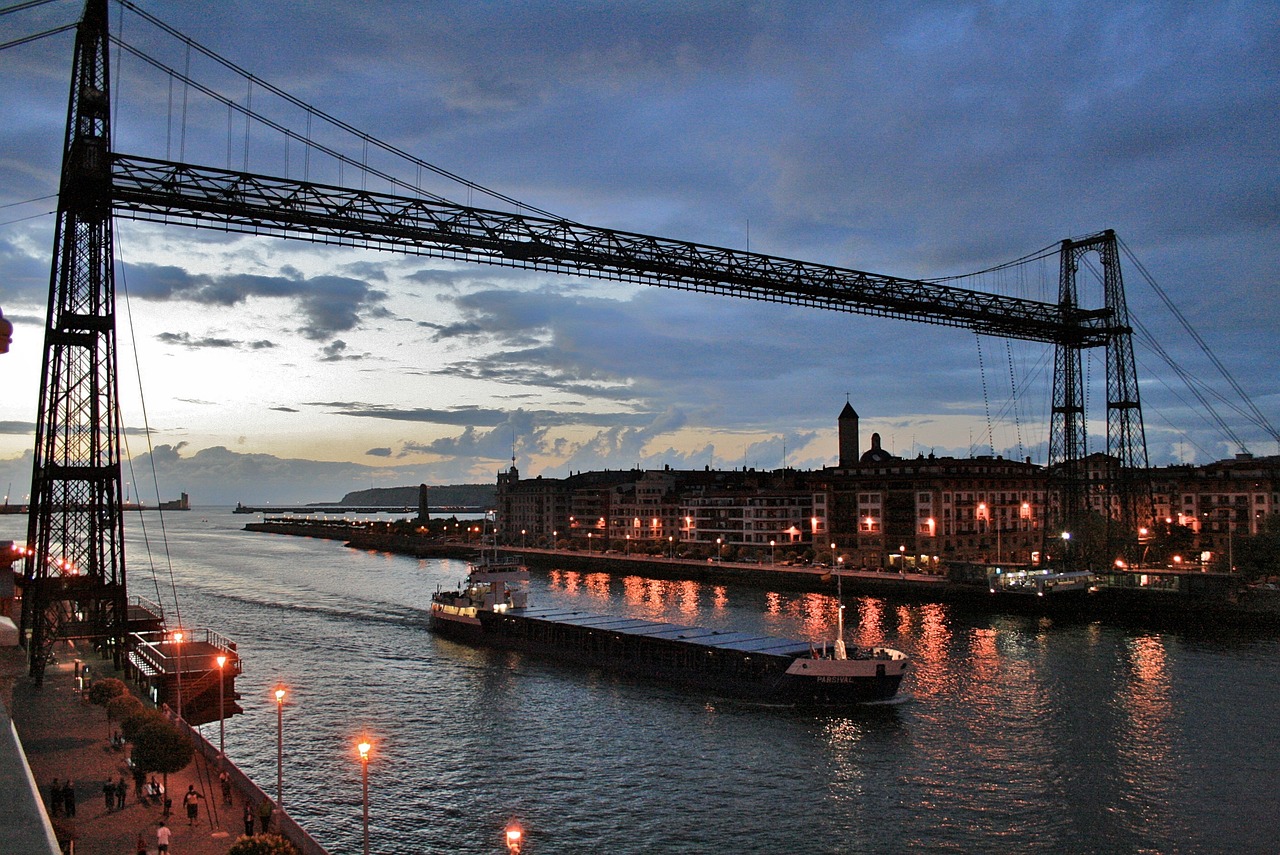 Getxo is a lovely coastal town in the district of Bizkaia, just about half an hour from Bilbao by metro. Originally a luxurious residential area for the rich industrial bourgeoisie of the 19th century, Getxo still retains the charm of that time, with stunning palaces and villas overlooking glorious beaches and splendid waterfront promenades.
Great spots worth checking out are the impressive Unesco-listed Bizkaia Bridge, connecting Getxo to the village of Portugalete, the 18th-century Aixerrota Windmill, and the traditional fishermen's houses of the Old Port.

Sitting at the foot of La Rhune, one of the region’s most spectacular mountain peaks, Sare is a lovely hilltop village that attracts visitors with stunning views and unspoiled nature. The village’s houses are decked out in pure Basque-style, with distinctive sloping roofs and colourful shutters, while the beating heart of social life is Place du Fronton, where locals play pelota, a traditional Basque ball game.
The sights of Sare include also the 17th-century Church of Saint Martin, whose unique interior features three rows of balconies and a wall painted with biblical scenes, and Ortillopitz House, a traditional house where guided tours illustrate the history and traditional life of the Basque community. 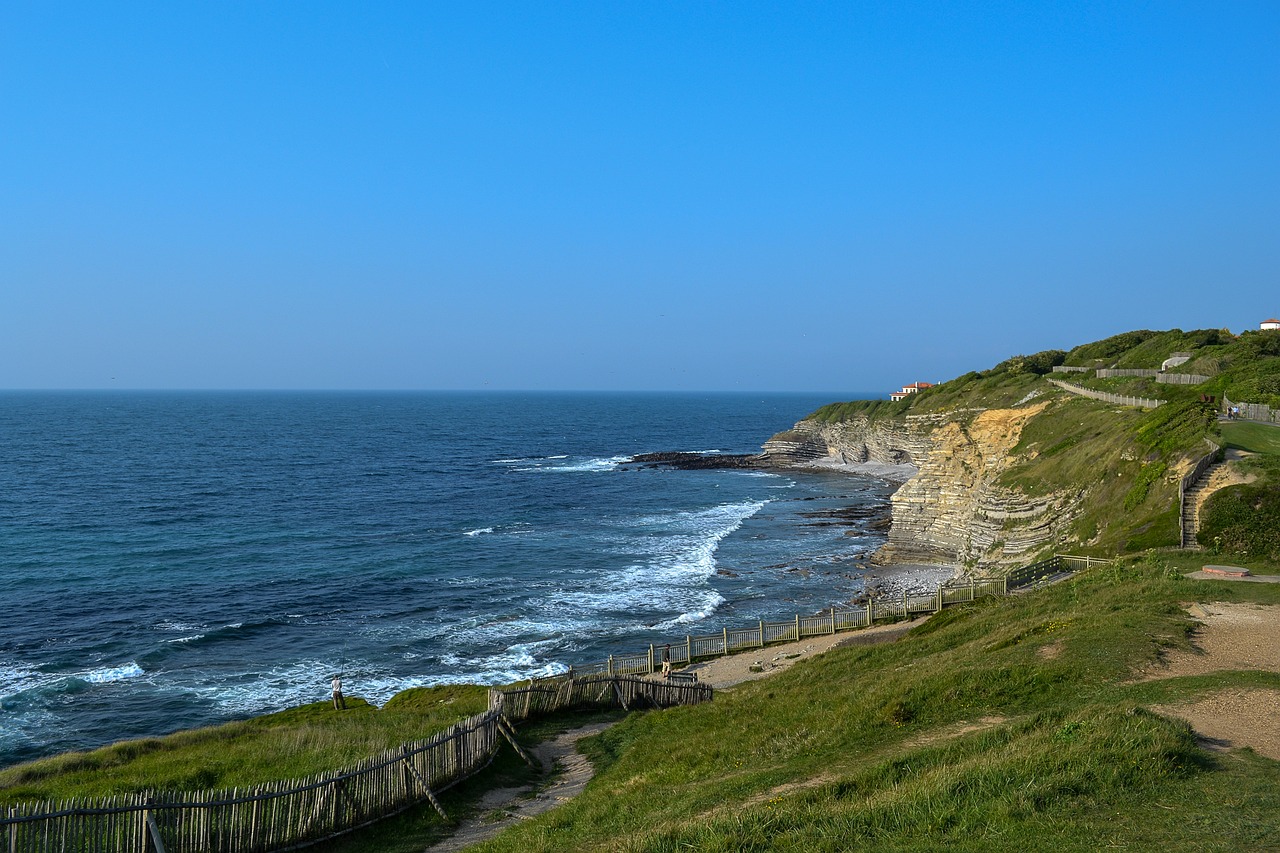 Less than 30 km south of Bayonne and Biarritz, Saint Jean de Luz is one of the region’s hottest postcodes for a relaxing break, thanks to its sandy beaches, sparkling blue waters and laid-back atmosphere. The town features a chic mix of French and Spanish influences, which is no surprise since it is here that Louis XIV and Maria Theresa of Spain tied the knot back in 1660, thus ending a long conflict between the two countries.
Handsome buildings run along the beach promenade, while major landmarks in the town centre include Maison Louis XIV, the house where the French king stayed while waiting for the arrival of his bride from Spain, the Maison de L'Enfant, with a splendid facade covered in pink bricks and golden stones, and the popular covered market Les Halles.

A guide to the best food in Barcelona

Local gastronomy in Barcelona is as impressive as the architecture of the town’s most iconic buildings, with historic tapas bars, colorful marke...

The Spanish capital is a pure gastro heaven, with an array of amazing restaurants serving culinary delights that go well beyond the ever-popular paell...