The Spanish capital is a pure gastro heaven, with an array of amazing restaurants serving culinary delights that go well beyond the ever-popular paella. Here are 10 places for a taste of Madrid, from haute cuisine dishes to gourmet tapas: 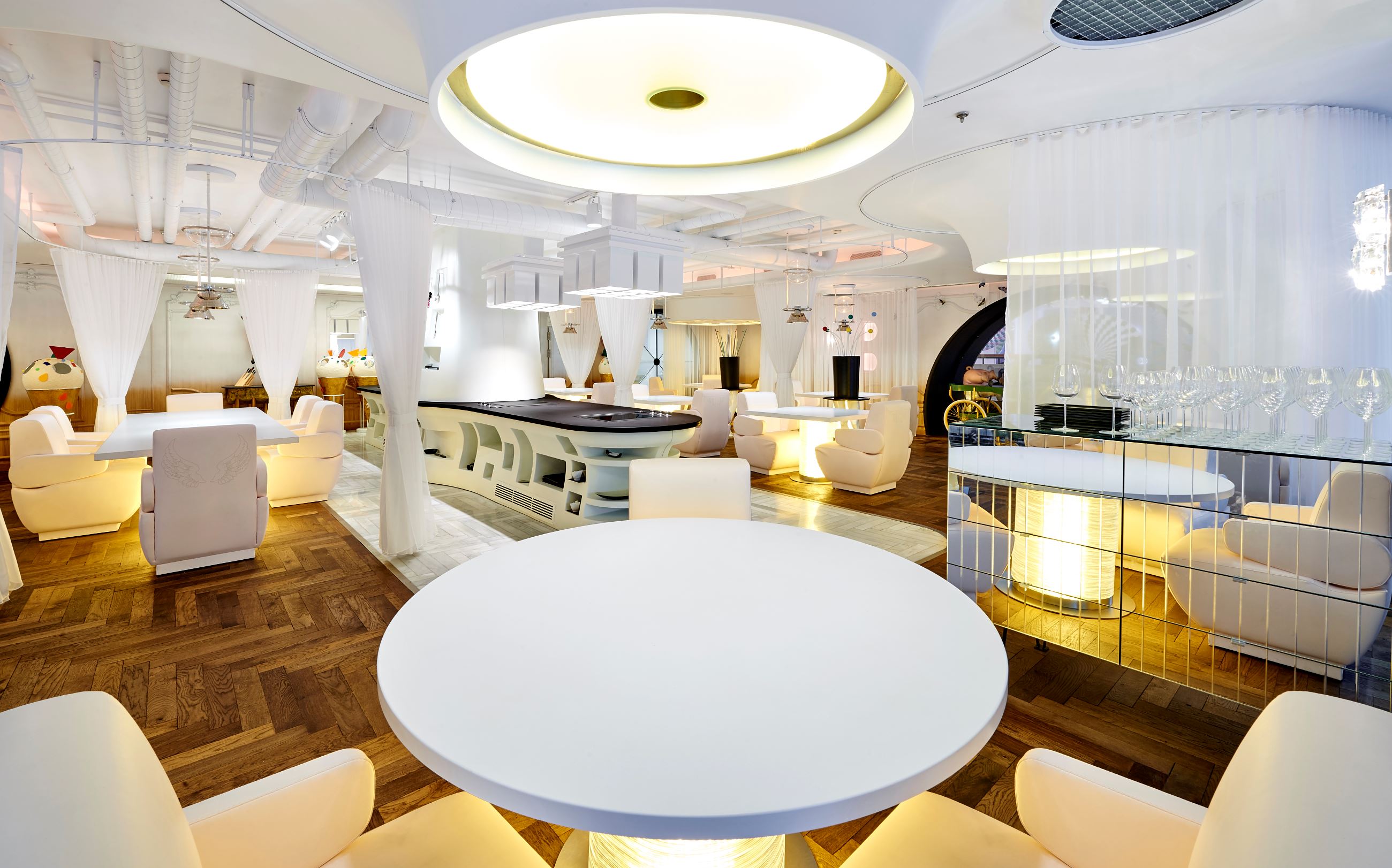 Dining at DiverXO is surely one of Madrid’s most unusual gastronomic experiences. The city’s only three-Michelin-starred restaurant is the reign of David Muñoz, the unconventional chef who thinks of plates like “lienzos” (canvasses) where he creates incredible works of culinary art. The menu is an exquisite mix of Spanish tradition and Asian flavours, with the Flying Pigs tasting menu offering an exciting journey around the globe. It’s not unusual to see cooks rushing to tables to add ingredients into diners' plates and the quirky decor of the interiors, featuring swarms of black butterflies and sculpted pigs with black wings, just adds to the whole dining show.

The setting of this elegant restaurant is the former library of a grandiose 19th-century palace, where the original features have been beautifully retained. Part of the 5-star Hotel Santo Mauro, La Biblioteca offers an intimate dining venue with only a handful of tables, where guests can enjoy traditional Basque and Spanish dishes with a modern twist, accompanied by the fine wines from the restaurant’s well stocked cellar. What’s more, in the summer months it is possible to dine in the garden, where candles are lit up in the evening for the ultimate romantic dinner.

Dining at El Club Allard is a grandiose experience in every sense. From the solemn interior décor boasting high ceilings and chandeliers, to the impressive menu that blends traditional flavors and modern aromas, everything in this restaurant oozes elegance. Led by Chef José Carlos Fuentes, the kitchen serves creative and visually-impactful dishes that burst with flavour and earned the restaurant two Michelin stars. Guests can pick from a la carte menu or seasonal tasting menus, paired with excellent wines specially selected by the in-house sommelier, Álvaro Prieto. 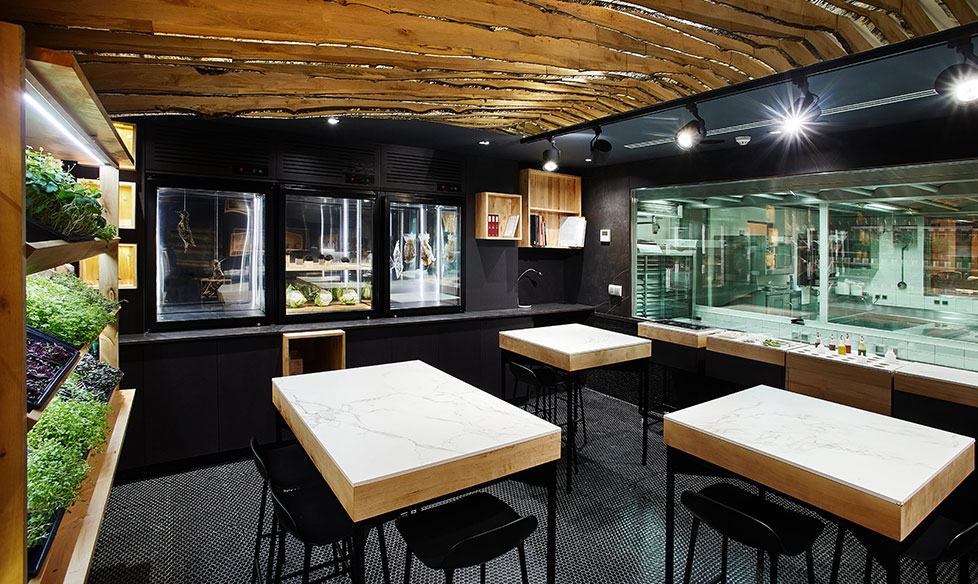 Part of the Hesperia Madrid Hotel, Santceloni is an award-winning restaurant that offers creative gourmet dishes like duck lasagna with Idiazabel cheese and celeriac noodles with black truffle, to pair with one of the 900 wines from the restaurant’s own cellar. Santceloni is also renowned for its extensive selection of cheeses, which includes over 300 varieties. Menus are seasonal and available to guests are a private studio with views over the kitchen and a Cigar Club to indulge in an after meal cigar and drink.

Hortensio is the creation of Colombian judoka-turned-chef Mario Valles, who opened the restaurant in 2015 and quickly made it the gastronomic gem of Madrid’s Chamberí neighborhood. His dishes combine traditional cuisine and innovative techniques, with a short menu that includes gourmet delights such as smoked aubergine pie, grilled pigeon, and lobster (there is no tasting menu). The ambience is cozy and intimate, with exposed-brick walls, soft lighting and views over the open kitchen to watch the chef in action.

This restaurant is located in the district of Guindalera, slightly outside of the city center, and, as the name suggests, it’s specialized in traditional Galician cuisine, with a modern twist. Items on the menu include things like braised octopus in a crispy tempura with Galician ajada pure, hake lasagna in sailor sauce with clams and Galician crepes stuffed with a sweet cheese mousse. Lots of natural light brightens the dining room, which features a chic mix of exposed-brick walls, white and blue ceramic tiles and hanging vegetation here and there. There is also a lovely bar offering artisanal cocktails and a great selection of Galician orujos (pomace brandy).

Those craving tapas should make a beeline for Juana La Loca, a trendy spot in Madrid’s La Latina district, offering gourmet tapas and cocktails. Here Spain’s classic small bites take a creative spin, with tasty treats like smoked eel and hazelnut gratin millefeuilles with Iberic bacon, truffled eggs and fried Gernika peppers with bacon and melted brie. One of the restaurant’s signature tapas is the traditional tortilla de patata with onion confit, which is said to be the best in town. The atmosphere is vibrant and laid-back, and guests can either take a seat or join locals at the bar counter.

Cebo is the culinary hotspot of the five-star Urban Hotel, featuring sophisticated interiors and a Michelin-starred menu. Under the watchful eye of Chef Aurelio Morales, the restaurant serves gourmet Mediterranean fare using fresh seasonal ingredients and local produce, which are combined into gastronomic delights where tradition meets innovation. Guests can choose between three tasting menus: Our Classics, featuring the restaurant’s most iconic dishes, Somos and Somos CEBO (the shorter and longer version of the latest creations, respectively).

Located just steps from the Retiro Park, Viridiana is the brainchild of celebrity Chef Abraham García, who’s considered one of the pioneers of fusion cuisine. The menu changes often and includes hearty, flavorful dishes served in generous portions, accompanied by one of the most extensive wine lists in town. Chef García even produces the extra virgin olive oil used in the restaurant and it’s not uncommon for diners to see him coming out of the kitchen to explain a dish. His many passions are well reflected in the restaurant’s décor, which features a unique hat motif and black and white prints of Luis Bunuel’s classic movie (from which the restaurant takes its name).

A two-Michelin-starred restaurant in trendy Chueca district that serves haute cuisine dishes in a relaxed, industrial-like environment featuring exposed-brick walls and metallic pipes. There’s no a la carte menu, but rather two tasting menus to choose from (one with 15 courses and another with 18 courses), and diners can see Chef Diego Guerrero and his team in action from the open kitchen. His cuisine is based on creativity and innovative techniques, mixing Spanish tradition with Mexican and Japanese flavours.

10 beautiful places to visit in the Basque Country

Occupying the stretch of coast between northern Spain and southern France, the Basque Country is an autonomous region that welcomes visitors with ...

A guide to the best food in Barcelona

Local gastronomy in Barcelona is as impressive as the architecture of the town’s most iconic buildings, with historic tapas bars, colorful marke...